(Recommendation: While the web version works I highly suggest running this game as a download either for android or windows for best performance)

In a little medieval town you find yourself playing black jack with a handsome orc blacksmith, covered in fur and oil.  To your right is a magic orb dealer that allows for betting games to be played with reduced cheating and higher pay outs and other "features". Where the story goes from there, who knows. But one thing is for certain this kinky wall of a meat plays for keeps.

The game is pretty much how you'd imagine it to be. Play basic blackjack and try to get up and or close to 21 without going over. The magic orb dealer will decide who draws first and will give random cards. You can change your bet by pressing the bet and money text at the top left. Strip version is pretty obvious, the more you win the more clothes the beefy orc loses. Also you can press the cam button to switch cam positions to look under the table.

There is a betting change menu available if you wanna click on the bet text on the top left and also you cannot drop below 5$ so have fun with it.

There are 2 random micro events that can happen in the background, those being an arrow hitting the target on the wall and a mug being thrown.

I suck at voice stuff so went with the Breath of the Wild method and just did basic grunts or initial sounds followed by text, :o

Originally there were suppose to be three more opponents, a beefy dragon, werewolf and minotaur, but I both ran out of time and am still too new to character modeling to pull them off, so for now it's just the orcy boi, :p

So yea, just like a lot of mini games I make this game was primarily made so that I could learn some stuff for my larger projects. For example that smexy dissolve effect on the cards and clothes. I was also able to make a fairly easily modifiable rig for the orc so that I can cannibalize his rig, mesh and what not for better characters in other projects with fair amount of ease. Voice and dialogue were certainly a new thing to learn and I'm not entirely sure if I like that or not. Facial rigs and animation was certainly the biggest learning curve this round, Bara Beach Bear barely had any animation at all but this one has a facial rig (though not used much), hands and more that made it far more dynamic. But either way I think I have all the skills needed to begin working on my next large project!

This will probably be updated later on and touched up.

Now that this is done, time to get started on a larger project now that i know all that i need to begin work on "Furry Hogwarts", :D

A very well done game. My only suggestions would be to add a loading indicator of some sort on the web version (I was about to give up as I thought the game had hung) and maybe make the fonts a little more visible against the background.

Yee, the html/browser version was more of an afterthought, should pry remove it honestly. Sadly the original laptop that had the build for it died so pry cant change or improve it unless i remake it from the ground up. Still glad you liked it all the same, :3

Sorry to hear that you have lost the source code. I personally though would still keep the browser version up, maybe just add something in the description about giving the game time to fully load. I tend to play a game if it has browser version, rather than take the time to download a game I am not sure of.

ok added this to the desc: **Game takes a while to load in the browser so be patient if you're going that route**

That moment when you realize you don't know how to play Blackjack, but the game seems interesting:

its not that hard, it's a pretty simple and fun-addicting game, here's some info on the game:

Is there a way to make the dialogue last longer? It's lasting barely a second before disappearing for me.

Nope, sorry, didn't occur to me to throw in a speech speed modifier, @.@

Android version doesn't work. Every time I try to install it it just says "App not installed" with no explanation. I made sure to give it permission and everything.

That's odd, I just tried it and it seems to be working fine, you sure you downloaded the apk?, anyway to send a screen shot? :o

You bet. It's definitely the apk, I was super careful to make sure I tapped on that.

I reviewed an article about most common reasons people would get that error,usually ascribed to storage. But unless the game is over 50GB I don't think that's it lol, and like I said I made sure it got the correct permissions. I even reset my app preferences to be sure. 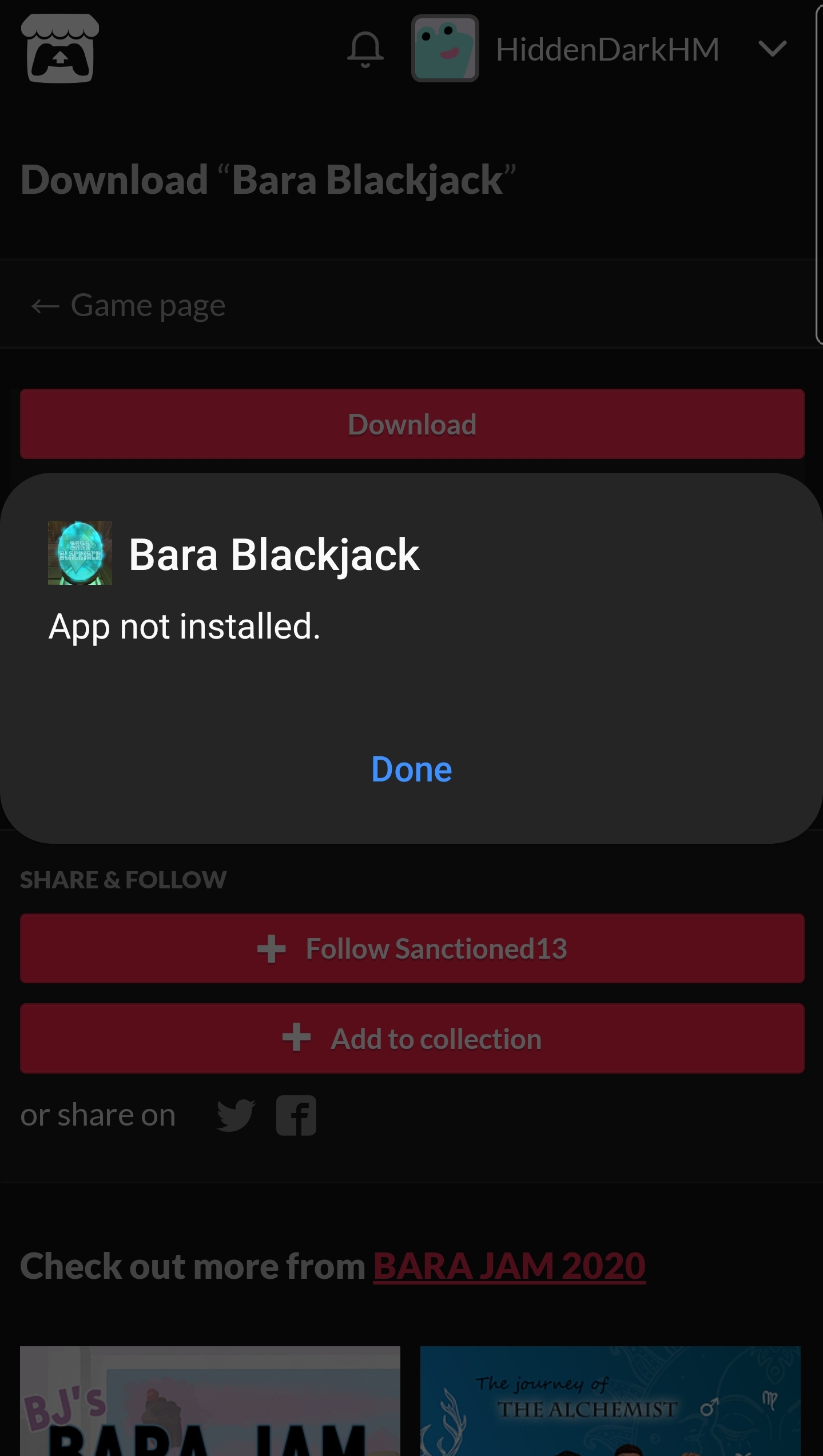 No worries! Just shoot me a message if you figure it out and I'll be happy to try again.

Yea not sure what's causing it, most people don't seem to be having an issue but some versions of android are? Tis weird, @.@ sorry, not much I can do without a version or device with the same specs as the ones failing to work, :(

That's one hot Orc.  It's just a shame it doesn't go further than just a game of cards :)

Well for this game anyways, he's currently being added into a raunchy rts game so tons more fun kinky interactions with him will be in there, along with his brothers, ;3

I'll be keeping my eyes peeled for that :D

Very nice for a short game jam, the model is quite handsome. I do notice that you can change the amount of your bet at any time during the hand, even after you draw. Then again, there are no real consequences or rewards here. Fun little game though

yee, a bit of an oversight on my part, still glad you enjoyed it, :3

I had a super fun time with this one, and it definitely left me wanting for more! Made me follow because I can't wait to see your projects, and should you return to this one as you continue to work on your academy game, (which I'm also looking forward to!) I can't wait to see any and all additions.

Lol, glad you like my stuff, and certainly, ill def be coming back to add onto this, granted this game was meant for me to learn some key things to develop Anthards Academy I'd still like to continue this and at least add some more fun characters and finisher interactions especially since soo many peeps seem to enjoy it. Glad you enjoyed it hon, :3

How long they Updated This Game, I been waiting so long

I can't Wait to New characters

it's been out 3 weeks bud, usually peeps take a month to update but this game is on hold for further updates til my larger project is out and public. So for the time being this one is sorta on hold til then, glad you've enjoyed it soo much tho, hope enjoy it's larger brother, please be patient, @.@

I'll be upfront and mention, bara isn't my thing, but since this IS a strip game, I decided to give it a try anyway, because I think we need more of these kind of games.

Still from what I played, this is a pretty solid concept! I only tried the 'Strip Blackjack' version, and about the only thing I'm unsure is if the player character actually DOES lose clothing or not. If we do, its not very clear.

Nah player doesn't lose clothing since it's just a prototype, but i'm glad you had fun all the same, :3

Please tell me if there is a way to please the orc when we go under the table!

Glad you liked it! Sadly no, his dong is only eye candy atm, I may be coming back to develop this game further after the jam is done but for now I'm afraid getting a looky loo is all that's available atm, :3

Ok then! Amazing game none the less! Also, here is a suggestion. The more you lose your clothing, the more hard the orc gets? You don't have to do this, but it seems pretty cool!

That is a pretty good idea, :3

Not gonna lie, this was just a prototype, literally a game made to learn some stuff for larger projects, I didn't expect it to be this popular so I wasn't even considering developing it further but it seems to be a fair bit popular, ill have to come back to it and develop it further it seems, :3

Of course! I hope to see more in the future! ;3

Looking forward to seeing the rest of the bois!

Glad you enjoyed it none the less, :D

That was a fun game, good work with this.  Would have loved to see more from the orc, but it was a pretty fun game none the less.

Glad you liked it and yea it is a tad short and gimmicky. But I use smaller games like these to learn skills to develop larger projects, I hope you'll enjoy those larger projects when they come out.

Either way glad you enjoyed it hon, :D

I think that's the best approach to these jam type things.  It's a nice, short and teasing experience, and it's great that it's at least a finished thing.  Great work, it's enjoyable.

Thanks, glad you enjoyed it hon, :D

Like it a lot, I'd really like it if there was more of a reward than just seeing it though. Would definitely like to see this more fleshed out.

Also found another money exploit. It you increase/decrease the bid before the money gets taken, you can be completely safe every bet while earning huge amounts.

Hu thanks for the info. Also thanks for playing, glad you enjoyed it even if it does stop short after some eye candy, :3

My other projects will certainly be more interactive, :3

I took all of 5 minutes before I discovered how to cheat and make a ton of money.

Lol, yea, tho the money doesn't do much, this is why i need to start asking for play testers to help. Don't worry tho a patch is nearly done, :3

Ok, it's been patched, thanks for the input bud, :D

I like it a lot! I just couldn't read most of the Orc lines, they go too fast for me hehe

Looking forward to see more of your work!

Thanks and yea sorry, didn't have enough time to put a dialogue speed setting, was kinda making it for android and slower computers which run the lines slower, either way glad you liked it, :D

will we have to play blackjack against someone at furry hogwarts? Haha

I mean, there certainly will be mini games like this, sure why not thro blackjack in as a fun mini game among the others. Over all i learned a lot that can be carried over, so maybe, :3 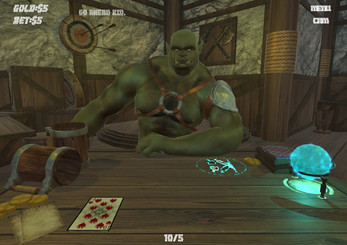 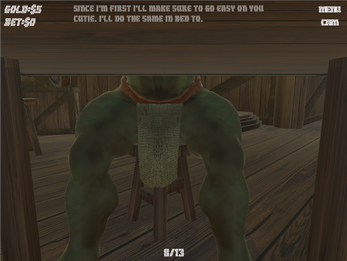 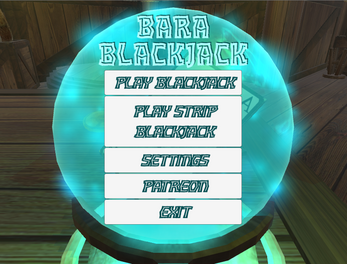